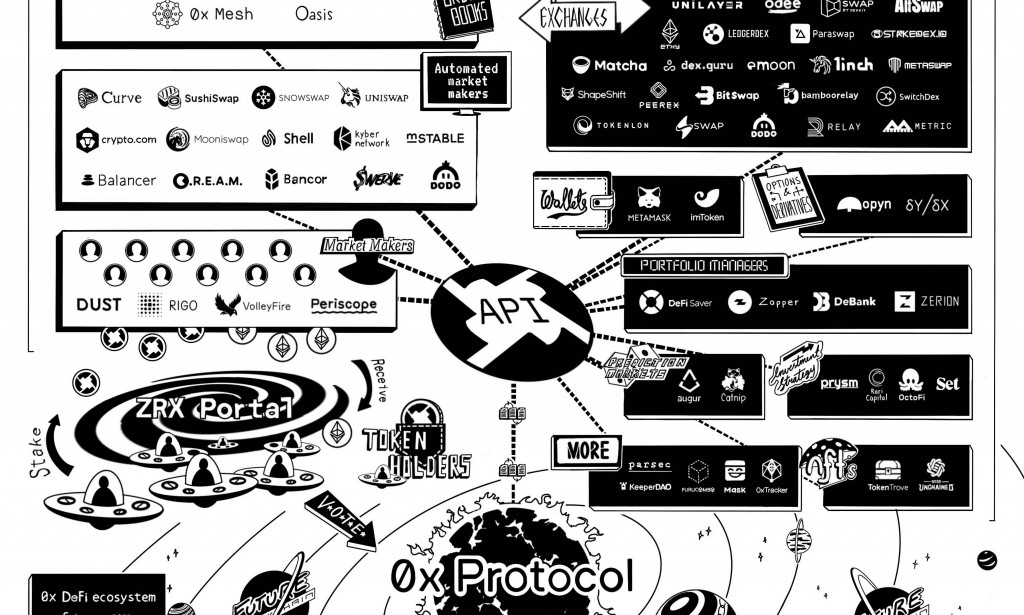 You might have heard of 0x but perhaps you didn't know that some of the most known and used paltforms and tools rely on its protocol, namely Metamask, 1inch, Matcha, Zapper, Zerion, DeBank, DeFi Saver, DODO, Rari Capital, dYdX, Paraswap.

What is 0x protocol then, let's have a look.

0x is a protocol that facilitates the peer-to-peer exchange of Ethereum-based assets. The protocol serves as an open standard and common building block for any developer needing exchange functionality. 0x provides secure smart contracts that are externally audited; developer tools tailored to the 0x ecosystem; and open access to a pool of shared liquidity. Developers can integrate with 0x at the smart contract or application layer.

0x protocol uses an approach we refer to as off-chain order relay with on-chain settlement. In this approach, cryptographically signed orders are broadcast off of the blockchain through any arbitrary communication channel; an interested counterparty may inject one or more of these orders into 0x protocol's Exchange contract to execute and settle trades directly to the blockchain.

There have been over $1.5 billion stolen from centralized exchanges in the last 10 years. In response to this, the 0x protocol enables developers to build non-custodial exchanges; ones that never take custody over traders assets.

Instead, the assets are settled directly between the two trader's wallets when an order is filled.

0x uses a modular system of Ethereum smart contracts which allows each component of the system to be upgraded via governance without affecting other components of the system and without causing active markets to be disrupted.

Protocol fees and LP incentivises in the 0x protocol:https://github.com/0xProject/0x-protocol-specification/blob/master/v3/protocol-fees.pdf

Taker's fees will partly be allocated in community treasury to fund development of 0x ecosystem. The remaining fees revenues will be paid out to 0x market makers as a liquidity rebate, based on the liquidity they provide as well as their stake of ZRX tokens.

Protocol fee that the taker pays is pegged to the gas fee, for example, if the taker pays $0.10 gas fee in ETH, would also pay $10 for the protocol fee. But note that a taker can set up a trade for a specific gas fee, meaning can wait for the order to settle for a range of gas fees.

In essence, the fee and rebate scheme should ensure that the distribution of rebate income remains consistent over time even as market conditions change.

Token holders stake their ZRX to unlock utility within the 0x ecosystem. This includes earning liquidity rewards through market making on the 0x protocol and participating in governance over the protocol.

The future
Although 0x protocol is yet only utilised in Ethereum, 0x has ambitions to enable trading on and between all major blockchains.

Below listed concepts will give us an idea how much adoption 0x protocol could potentially gain in the future:

* A decentralized exchange for X asset on Y market

* An Ebay-style marketplace for digital goods

* A DeFi protocol that needs liquidity and exchange to function (e.g., a derivatives, lending or options protocol)

In addition, 0x can also be integrated into any existing application where exchange is a feature, not the core purpose of the application. These applications include:

* Games with in-game currencies or items

Pretty wide use case, if you ask me.