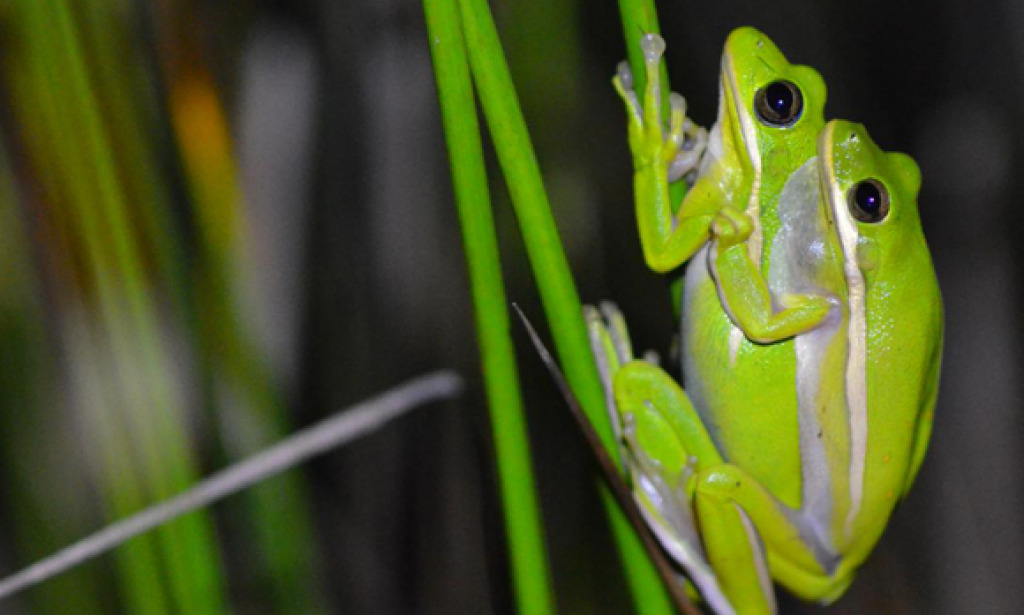 If you have ever had the opportunity to a lake or a pool of water with frogs in the evening, you must have been impressed by the noisy croaking chorus that greeted you. How do you communicate in such a commotion? In contrast to the noise at parties, which at most will cost you in getting the wrong drink at the bar, for a frog in the courtship season this is a fateful problem: it must isolate from the hustle and bustle only the courtship voices of the potential couple.

Finding the mechanism by which frogs deal with the problem can thus teach us how their sensing and communication pathways have been evolutionarily adapted to this, and perhaps even help humans find solutions to deal with noisy environments. A new study from the University of Minnesota in the United States, published in the journal Current Biology, found that a link between the frogs' lungs and their ears may be used as a sort of noise-canceling headset.

The eardrum is a membrane that separates the air that is outside the ear from the air space that is in the middle ear. When sound waves strike it it vibrates, and these vibrations are translated into an electrical signal that passes through the auditory nerves and is translated in the brain into sound.

Unlike mammals, in frogs and other amphibians the air found in their lungs connects through a small number of passages to the air found in their middle ear. In addition, the skin and muscles that separate the lungs from the external environment are very thin in frogs, so when sound waves hit the body they also vibrate the air inside the lungs. This special anatomical structure is theoretically capable of transmitting sounds from the lungs directly to the middle ear. Thus the sounds that the frog hears are due to the sum of the sound waves that directly vibrate the eardrum from the outside, and the sound waves that come indirectly through the lungs and vibrate the eardrum from the inside.

Although scientists have long known the anatomical link between the frogs' lungs and their ears, they have not been able to determine its effect on the way the frog hears its environment. Researchers from Minnesota have now found evidence that this is a sophisticated noise filtering mechanism - a kind of internal headset.

Using a Doppler-based laser meter, similar to the police speedometer, the researchers measured the intensity of the vibration of the eardrum and abdomen of females of the American tree frog (Hyla cinerea), by exposure to sounds at different frequencies. It was found that when the frog's lungs are inflated, so its internal auditory pathway should work because the lungs contain air, a significant decrease in the sensitivity of the eardrum is seen in the frequency range of 2,200-1,400 Hz, compared to the sensitivity of the eardrum when the abdomen is empty of air.

The mechanism by which this weakening occurs has not been tested in the present study. The researchers hypothesize that the sound waves that come through the link between the lungs and the ear create destructive interference with the sound waves that reach the outer wall of the eardrum, meaning the highest point in the first sound wave hits the lowest point in the second sound wave. Thus the waves cancel, at least to some extent, each other - similar to the mechanism of action of headphones canceling noise.

The study reveals the beauty inherent in animal adaptation during evolution. Because frogs live in noisy environments, there is an evolutionary advantage to species that will be able to solve the communication problem in noise conditions. A possible solution, which the frogs seem to implement and exist and also in human electronic communication, is that different species will communicate at different frequencies. For the method to be effective, the party receiving the communication must successfully select the frequencies relevant to it from the set of frequencies - that is, increase the desired frequency compared to other frequencies. The biological mechanism found by the researchers seems to play exactly this role - and since other species of frogs have a similar anatomical structure, this mechanism may be common to all or most of the frogs.