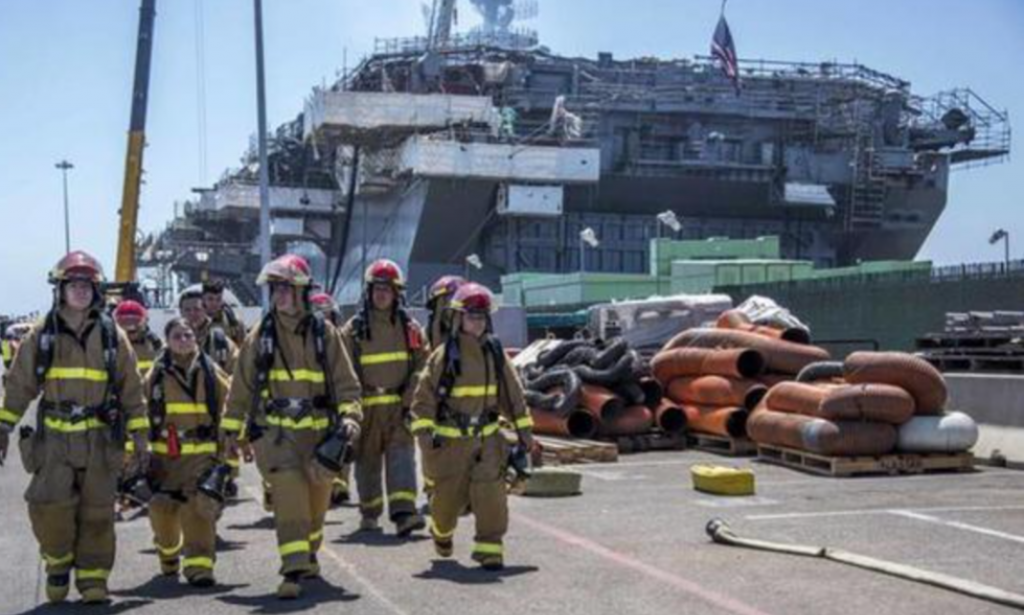 The U.S. Navy isn’t ready to repair ships that suffer damage in battle. The fleet lacks the parts, processes, plans and—perhaps most critically—the shipyard capacity to fix ships fast and send them back into battle.

That’s the foreboding conclusion of a new report from the U.S. Government Accountability Office. To begin righting the ship, so to speak, the Navy should stand up a new command whose sole purpose is to repair battle-damaged vessels, the GAO recommended.

Fleet leaders told the GAO they “partially concur” with the office’s finding.

The Navy’s repair problem is long in the making. “The Navy has not needed to triage and repair multiple battle-damaged ships in quick succession since World War II,” the GAO explained.

“After the end of the Cold War, the Navy divested many of its wartime ship repair capabilities,” the GAO added, “and its ship maintenance capabilities have evolved to focus largely on supporting peacetime maintenance needs.”

“However, the rise of 21st century adversaries capable of producing high-end threats in warfare—referred to as ‘great power competitors’—revives the need for the Navy to reexamine its battle damage repair capability to ensure it is ready for potential conflict.”

But the Navy isn’t ready today. If the American and Chinese fleets met in battle and U.S. ships swallowed a few Chinese missiles, the Navy would struggle to fix up those ships in time for them to rejoin the fighting, the GAO found.

The office’s auditors cited a host of problems, among them a “lack of established doctrine for battle damage repair” and “a lack of clear roles and responsibilities.”

Moreover, the Navy at present mostly relies on private contractors to fix damaged ships. As a result, sailors have little incentive to learn critical repair skills. “For example, Navy officials noted that training for sailors often focuses on the replacement of damaged parts, rather than repairing those parts. While replacement may be an appropriate solution in an environment where parts are readily available, Navy officials raised concerns that it might be problematic in a contested environment with vulnerable supply lines.”

The fleet to a great extent also counts on contractors to tow damaged ships. That’s not a problem in peacetime. But in wartime, civilian tugboat crews might be reluctant to sail into an active battle zone.

Yard capacity is the biggest problem. After decades of post-Cold War consolidation, the U.S. naval shipbuilding industry is down to just five big shipyards and a few smaller ones. The Navy itself owns four yards.

That’s barely enough yard capacity to build and maintain the 10-to-a-dozen new ships the Navy annually has bought in recent years. “Given its current challenges, the Navy would likely have difficulty meeting any further increase in demand that would result from battle damage sustained during a great power conflict.”

The sad example of the assault ship Bonhomme Richard is illustrative. A fire broke out aboard the 844-foot vessel while she was pier-side at the Navy’s base in San Diego on July 12. The Navy concluded it could not repair BHR quickly or cheaply enough to justify the effort. The ship decommissioned in April and is now at a scrapyard on the Gulf Coast.

“This has significant implications for us when you consider a future naval war with any competitor,” said Jerry Hendrix, an analyst for Telemus Group in Virginia and the author of To Provide and Maintain a Navy. “What it highlights is that the United States lacks sufficient repair or construction capacity to really respond to losses in a wartime environment. If a ship is out, it’s out.”

semaj a clark
Join Our Newsletter